The largest aquarium in Asia,

Aquaplanet began its journey by envisioning a space where nature and humans could peacefully dwell together. This dream led to the creation of Aqua Planet—the largest premium maritime theme park in Asia. 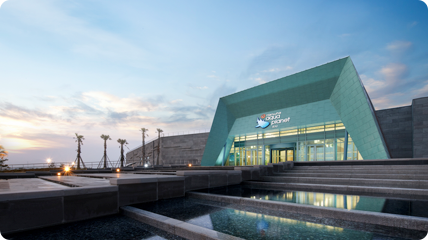 In the name Aqua Planet, “Aqua”

refers to the magnificence of the ocean and the meeting between maritime science and humans. “Planet” refers to the exploration of cutting-edge sciences by visitors, much as if they were exploring planets in space. Aqua Planet Jeju is the largest aquarium in all of Asia, boasting a total ground area of 25,600 m² and measuring 18,000 tons. It is 11 times larger than the 63 Sea World and features the largest single tank in the world. The aquarium is home to 48,000 animals representing 500 species. This diversity of animal life is what places Aqua Planet Jeju among the top 10 aquariums in the world. Built as an “amusement theme park” offering educational, cultural, and entertainment contents all in one place, Aqua Planet Jeju operates the “Oceans of Jeju” exhibit, which re-creates the seas surrounding Jeju, as well as the Maritime Science Experience Hall and the Large Maritime Performance Hall.

The shape and color of the BI (brand image) cannot be changed and must be used in accordance with all stipulated regulations.

The brand “signature” refers to the coupling of the symbol and logo in accordance with all designated standards in the optimized ratio. Use the appropriate signature in consideration of the layout of the applied space and applied media and follow the designated principles regarding the coupling method.

purposes to share the value of marine animal conservation and to provide visitors with fun and enjoyable experiences that emphasize the coexistence of humans and nature.

Aqua Planet shares various shapes and forms of the marine ecosystem that people cannot easily access in their daily lives in order to share the "value of maritime culture” and to increase public awareness of “ecosystem conservation.”

Aqua Planet Jeju strives to pay back customers for their kindness by continuously providing fresh and touching programs. Visit “Aqua Planet Jeju” to experience the magnificent ocean and to learn more about the importance of conservation!

What is “ Environment Management? ”

Offered for free to elementary school students who live on Jeju Island, this maritime training program contributes to the local community by teaching children about the importance of conserving the natural, maritime environment (conducted in 2013 and 2014).

Cleaning activity near the Jeju coast with local institutions, NGO companies, and residents

The goal of this program is to provide an optimal living environment for marine animals and to promote awareness of environmental protection as an Ex-Situ Conservation Institution.

Cleaning activity near the Jeju coast with local institutions, NGO companies, and residents